Some people have valuable skills and knowledge that because increasingly profitable.

Others have skills (or lack there off) that become commoditized and less valuable. 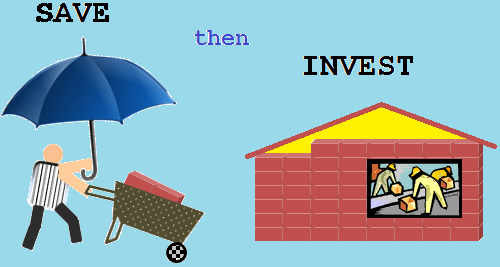 To become wealthy, whether you are a person or organization, you need something valuable that can grow. This can be a skill, system, brand, patent, real estate, or anything that can produce value over time. Wealthy people usually have a collection of some or all of these that they accumulate over time. You can develop a skill that is valuable to a marketplace; some people continue to develop their skills and grow them for decades. They also combine them together to become even more valuable. If you pick the right skills to develop, the ones that are scarce and unique, you eventually get to charge a lot of money for them.

For example in the medical industry there a wide variety of certification levels. At the low end there are positions like a Certified Nurses Assistant (CNA) which takes a short training course to become certified. There are several levels of nursing certifications and specialities, each more valuable, unique and higher paying than the next. The same is true for doctors, a general practitioner is the baseline, then specialties move up the pay scale until you get to a specialized surgeon, the highest paying positions for practicing doctors. Each rank of medicine has a well defined requirement for education, training and experience.

As long as people are getting sick, doctors and nurses will be valuable and make good money.

There is another level of income though. The ones who are able to combine their medical skill with entrepreneurial or business skills, they manage large practices or become hospital administrators and executives.

Combining and developing a skill set can become increasingly valuable. On the high end of any industry, compensation is determined by strategic negotiating. There are only a handful of people who are qualified to perform surgeries, which makes it incredibly difficult for a hospital to recruit and hire one. As a result, surgeons have a very strong negotiating position and can demand a high salary to show up.

Poor people generally don’t have large skill sets or the skills they have don’t create economic value for other people. Most of them work jobs that require basic skills that are easily commoditized which makes them replaceable. If there are a lot of people who can replace you, you don’t have any leverage to negotiate. Unfortunately most jobs don’t financially differentiate between someone who is great or simply adequate. Think about the barista at your favorite coffee shop, they need some functional skills to make drinks and work the register, they also need some soft skills for selling and customer service. Lastly, they need to be reliable and show up for their shifts on time and get along with other employees and management. Most people can be taught all the skills to hold this positions in a few days; which means if the barista wants a raise, the employer can let them go and hire someone else who will be up and running in a few days. If a surgeon threatens to quit, they will get a raise. It would take months (if not years) for a hospital to find and hire a replacement, costing them millions of dollars worth of revenue, and potentially risking people lives; making it far easier to just pay the doctor.

You also need to be providing a skill that is valuable. Imagine if the barista were the greatest in the world with 40 years experience; would this make you want to pay extra for the coffee? Maybe a little, but not much. This happens in the artistic and creative fields all the time. Artists can be very good at their craft yet not very many people want to pay them for it. Unless you are Beyonce and have the perfect mix of talent, marketing, sex appeal and luck, you aren’t going to get paid very much.

It’s easy to point fingers at highly compensated people and call them greedy. The common reality though is that they highest paid people make a small percentage of the revenue they produce. A CEO of a large company can make decisions and take actions that create billions of dollars in addition profits and revenue for the company; in return they make pennies on the dollar for the value they create. I’ve got friend who’s a heart surgeon making around $600,000 annually; the hospital billed $17,000,000 last year for his services. Obviously there are a lot of different parties contributing to the surgeries he performed who need to be paid, but he still only took home 3.5% of the revenue generated. By contrast, the barista who makes me lattes every day gets tipped 15–20% in an average shift, her portion of the revenue if 5x what the surgeon gets.

The same is true at the organizational level. Once a business have a profitable model, they are able to replicate it millions of times until they’ve dominated a market. They are able to use their profits to reinvest in the business, improve their products, develop new ones and grow their operation. Google, which is one of the most profitable companies in the world, has made nearly all of their money from one business unit, online adds. Since inception Adsense has been responsible for upwards of 90% of their revenue until recently. They’ve taken all of their cash flow and used it to develop new technologies such as phones, computers, driverless cars and a million other projects no one know about.

Once you have talent and capital, you can use it to grow your position.

This post may contain affiliate links, if you click the link and make a purchase, I may be paid a small commission.