You probably aren’t that rich.

What people consider to be rich can vary widely depending on the context.

Using money as a method to attract women can certainly work if executed properly, but it won’t attract all women.

Attracting women is largely about creating intrigue and excitement, creating an experience that other guys can’t offer. 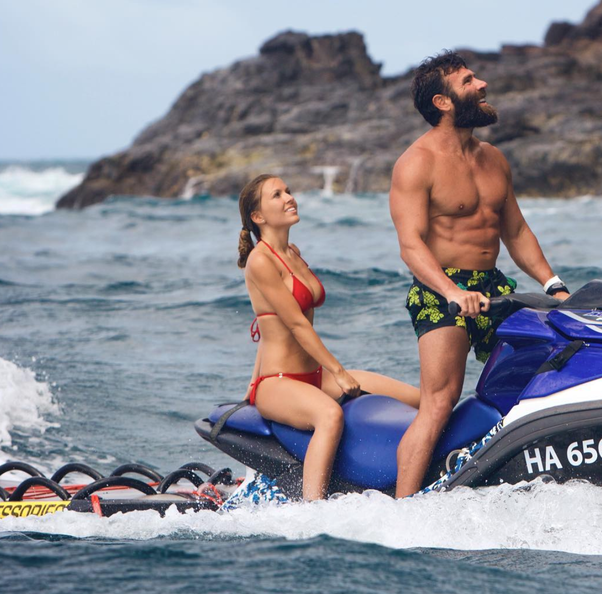 Like this girl with Dan B, she doesn’t like him because he’s funny or smart; she knows that hanging out on a yacht and going jet-skiing isn’t an opportunity that comes up very often.

You need to do or say something that makes the women interested in you and creates some form of excitement. There are a lot of ways to do this, money isn’t really needed, nor are good looks. You can be smart, funny, passionate, unique or whatever it is you do, some women will find it attractive. Being good looking and/or rich is are only two of many different reasons women will like you. That being said, they are two of the more common ones.

When women are deciding whether they’d want to date you, they are on some level imagining what their life would be like with you in it. This could be both short term or long term. If you want to attract someone, you need to signal that you can provide something to her that she values and isn’t getting anywhere else. You may be really outgoing and fun, she may be attracted to that. You may have a passion that she thinks is attractive like music or art, women don’t need to have the same passions, if they sense that you care about something deeply, they will become interested in it.

Having more money that other guys may be your competitive edge. She probably doesn’t really care about the money though. She probably is attracted to you because you took her places that other guys don’t. Fancy restaurants, art museums, vacations, etc. Whether or not she wants to date you isn’t just about you, it’s about what it’s like to go on a date with you. If you can take her somewhere fun or exciting, she’ll come back for more. You don’t need a lot of money to create this fun and excitement, but it can help. Also, just because you went somewhere expensive, doesn’t mean she’s going to enjoy herself.

If money is the attractive trait that you offer, you need to understand the supply curve of rich guys.

There are a lot of guys who have decent careers and above average incomes. There are many guys who have “good” incomes. There are very few that have exorbitant wealth. Being able to provide merely a comfortable lifestyle will be attractive to some, it will make you acceptable to most women; it won’t be what attractive though. A lot of guys can take care of her and provide a comfortable lifestyle. Having a high income, which varies depending on where you live and what type of women you are trying to date, will excite some women. If you are well off, like a doctor or lawyer, they will be able to envision a life with you and be excited to some degree about the life you will be able to build. Then there are the guys who are extremely wealthy. These are guys who are at least multimillionaires, where being rich is the most notable trait about them. If you want to use money as a hook to attract women, this is where you need to be. Women need to meet you and daydream about what your lifestyle is like. Women aren’t going to be falling over you unless they feel like you are a once in a lifetime opportunity.

The reality though is that being rich won’t attract most women. Women like rich guys, but they don’t care that much about the money. Unless you are extremely wealthy, it is more of a pass/fail proposition, either you can take care of them or not. You need a ton of money before they start to get excited about it. Women are attracted to the personalities that are common among rich and successful men. They are attracted to people who are confident, independent and outgoing. Rich people don’t act like they are nervous very often, they aren’t shy or worried constantly. If you can present yourself well, be confident and have fun, women will be attracted to you.