When I was 24 I had a salary just under 80K and made a little under 100K including bonuses.I also had about $20,000 worth of extra income from odd jobs and things I did on the side. It was awesome. I was young, single and had no kids. The average graduate from my school made $44,000 and had debt over $10,000. This meant most of my friends made $40 -50k. My family, friends, and parents all assumed I was in that range as well. I lived in a Scottsdale which is a very high end area of Phoenix, in one of the nicest buildings in town. At that point in my life I was able to do everything my friends did and, financially speaking, fit in with my piers. I never had to turn down a social invitation due to money. I never had to worry about paying rent or anything else. I had friends who spent every dollar they had and then some and I was able to keep up with no problem. The beauty of it all was that I could do everything I wanted and only spend about half my income. After taxes I made $90,000 and only spent about $30,000. Even with only $30,000 I spend most of my time in places like this: 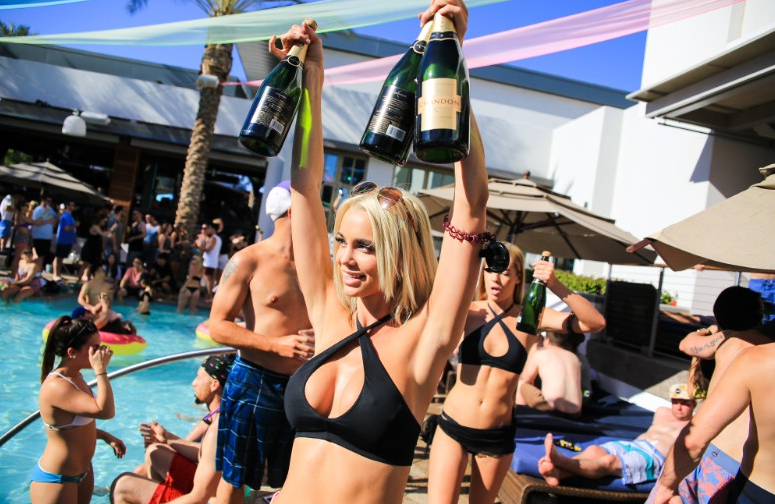 Within a few years at this rate I was able to put enough money away to drastically change my life. I had enough money to buy a house (I chose not too), start a business (my best investment ever), and put away enough money in a retirement account so that it will compound to $4–6 million by the time I’m in my 60’s. This reduced my stress level significantly. I didn’t need to worry about paying for things, if a surprise arose (car breaking down) I could always write a check and forget about it. From the time I was 24–26 the only transaction I made that was larger than a single paycheck was buying a used car for $13,000. For years I never had a month where I spent more than what I made.

My point is that for someone in a moderately priced city making $80–100k is a fortune. This can change quickly though.

If you get married, it will likely be to someone who makes less money, which will dilute your income. Rather than $80k for one, you might make $120k for two. If you have children, that money gets divided up quickly, in addition to you or your spouse needing to work less (if at all) to care for the kids. $80k for a family of four is very average. In most cities you will be able to afford a comfortable home and all the essentials. You won’t have a lot of the luxuries. No fancy cars, vacations or private schools.

$80k per person would make you among the wealthiest people in the world. Imagine making $400k per year, this would put you in the top 1% of earners in the country. That must be a pretty awesome lifestyle right? Keep in mind though that the majority of people at that income level are aged 40–60, married, and have kids. The $400,000 is also combined income which may mean that it took two full time careers to earn it. $400,000 for a family of 5 (two parents and 3 kids) is only $80k per person. Once you breakdown where that money goes, $250,000 after taxes, it’s not that exciting. It is still a ton of money, 6x the average household income, but it isn’t the glamorous lifestyle that you see on TV. Financially speaking I’d argue the single 24 year old making $100,000 is better off than that 50 year old with a wife and kids making $400,000.

Whether or not $80,000 is a life of luxury is entirely up to how you decide to spend it and what type of lifestyle you have built for yourself.

There is one universal truth though: regardless of how much or how little money you make, your problems won’t go away. With extra money you will have better problems but they will still exist and they will be stressful. It doesn’t matter how big or small a problem may actually be, if it is the biggest obstacle you are facing, your mind will turn it into a big problem. The millionaire will take a “first world problem” like which private school their child will get into and turn it into a stressful ordeal. A poor person may be worried about making rent next month, a “real” problem. We’d all say that keeping a roof over your head is far more important that sending a kid to private school, but the reality is that each of these people will let their biggest problem consume them. Whether or not you worry about money is largely a function of your personality and income security. The people that don’t worry about money are the big earners, they are the people who have steady and reliable sources of income that they don’t have to worry about. I’ve read numerous article about the least stressed careers, they all report the same types of jobs as being the least stressful. At the top of the list is always college professors, they have above average incomes, great benefits and pensions, low stress work environments, high status titles, and most importantly they have tenure. They are guaranteed to have economic stability for the rest of their life with annual wage increases. Unless they write a best selling book they won’t ever become wealthy or be a 1% earner, but they will always have a comfortable lifestyle. One of my favorite authors is Steven Levitt, co-author of the Freakonomics: A Rogue Economist Explores the Hidden Side of Everything

series and tenured professor at the University of Chicago. Even before his success as a writer, he said he’s never worried about money and doesn’t save very much. The way he see’s it is that at the start of his career he was in his worst financial situation. He knew as a student with no money he would never be in a worse financial situation. As he started his career he knew he’d always be able to increase his income year over year, meaning he never really needed to save money. If you know you are getting a raise next year why not enjoy your money now and worry about future expenses in the future when you have a higher income. He’s in a unique situation though. He has one of the most secure jobs in the world, he makes an above average income and has great benefits. Most people will never enjoy that type of situation which means they need to save money. They need to save for emergencies and retirement and for peace of mind. Whether you make $80,000 or $800,000 what will make you happy is know that you can easily afford everything you need.

This post may contain affiliate links which means at no cost to the reader, I may earn a commission if you click on a link and make a purchase.